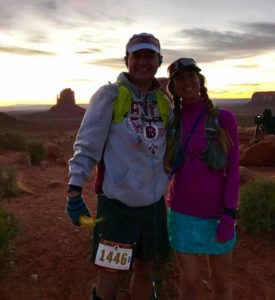 I’ve heard a lot about how one partner’s ultra habit will wreck any romantic relationship. Ultra running, people say, can have a similar effect to crack cocaine or a gambling addiction. The drug of choice soon becomes more important than anything else, including love.
Yet I know from personal experience that such dire predictions are much too pessimistic. Ultras can also make relationships better. My husband David and I have learned to live with my addiction, no, more than live with it – we thrive on it. It helps that we’re both runners, though his weekly mileage and motivation tends to be a lot lower than mine. To be sure, at times my running habit gets in the way of our marital harmony. Communication breaks down when I say I will be out running for an hour or so and get back four hours later, or when I’m so tired that even watching an episode of Game of Thrones feels like a chore. But overall, I have to say ultra running has made us stronger. We still do romantic things, just in a slightly modified way. 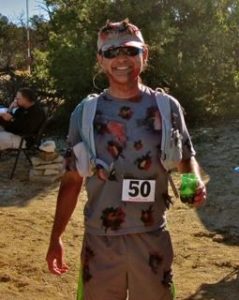 Best dressed male zombie at the Deadman Peaks ultra. I was so proud of him!

We celebrated our 25th anniversary this past October. David wanted to do something special.
“Would you like a diamond ring, or would you prefer a long weekend somewhere?”
He inquired.
“Do you even have to ask?” I answered. Of course I preferred a romantic getaway. As is our habit, we found the destination on ultrasignup, this time in Arizona, in the form of the Javelina Jundred. It was a perfect anniversary, from the lovely high-end resort we stayed in (aka our car) to the hike under the stars (i.e. David pacing me on the last loop). We even had a romantic dance in the disco-themed aid station at mile 90.

My disco moves were a little clumsy after 90 miles, but we had fun

We have spent many other anniversaries and birthdays racing or training or volunteering. For us, camping near a trail head or staying in a dingy motel in a small town before a race beats a fancy resort any time. Taking care of exhausted runners at an aid station or running up and down mountains all day beats other romantic activities. There is nothing we’d rather do. Really. 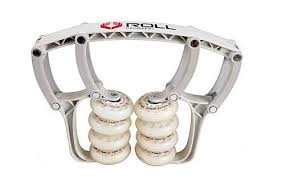 It hurts, but it also helps. Really, it does.

Red roses? Diamonds? Overrated. Our presents to each other tend toward the practical, like new running socks or hand-held bottles or a box of protein bars. For my birthday last year, David gave me a torture device. No, not that kind – please get your mind out of the gutter, people. The Roll Recovery is a foam roller on steroids, designed to cause maximum pain, which helps muscle fibers back into alignment after a hard workout. I was ecstatic.

I’m running the grand slam this year, which means serious training. David gave me my Valentine’s day present a few days early, so I could take it out on a long run on Saturday: a brand new GPS watch to replace my ancient Garmin. He got me the mens’ version, because its battery life is longer. Though it looks a bit clunky, I appreciate my new watch more than any piece of useless decorative jewelry. My husband really knows what I like. 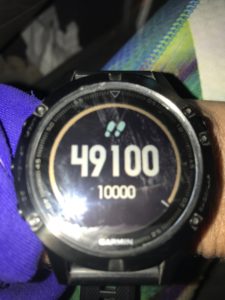 Better than a diamond-studded piece of useless wrist decoration

Romantic meals:
Our dinners tend to be late, which means we rarely eat out because we live in a small town where everything closes by 8 pm. I work long hours as a professional equestrian. By the time I get off my last horse, change into running shoes, run for a couple of hours, and drive home, all local restaurants have locked their doors. By the time I’ve showered and we’ve thrown together a quick meal, it’s 8:30 or 9 pm . We are starving and tired, but we still light a candle and enjoy conversation and a glass of wine before we fall asleep at the table. 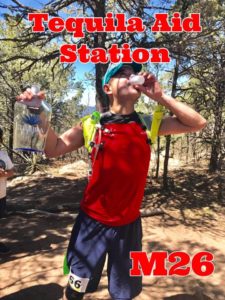 David bravely downing the tequila at mile 26 of Cedro Peaks. His secret ultra weapon is an iron stomach.

Ultra running opens up opportunities for other types of romantic meals: we’ve
shared energy bars under the stars while camping before climbing a mountain. We’ve nibbled all day on a delicious combination of swedish fish, fig newtons, gummy worms, doritos, and pickles while volunteering at a race. When David paces me during 100s, we share styrofoam cups of ramen noodles at aid stations, which really is romantic. In between aid stations, he force-feeds me bites of tortilla wraps, which is less romantic, but needs to be done. 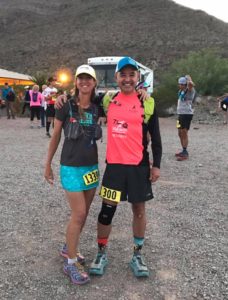 Seriously, running ultras has made our marriage better in many ways. David admires my ability to hang tough for 100 miles. In return, I appreciate so many things about him on a whole new level. When we run a race together, knowing he is out on the course makes me proud. So does watching him cross the finish line. But it’s his support for my races that really blows me away. He is my number one fan, my motivator, crew captain, and favorite pacer. He has spent many hours driving down bumpy dirt roads and waiting for me with fresh socks, hugs, and cans of soda. He has doctored my disgusting blisters. He has watched me puke and cry and bite the dust. When my ultra brain was too fuzzy to remember my head lamp at mile 62 of the 2015 Western States, he gave me his pacer lamp at mile 70 and did not complain about being left alone on the cougar-infested trail with just his iPhone to light the way to the next aid station while I charged ahead in hot pursuit of the silver buckle. More impressive than anything, he still finds me beautiful at mile 90, or at least he says he does. 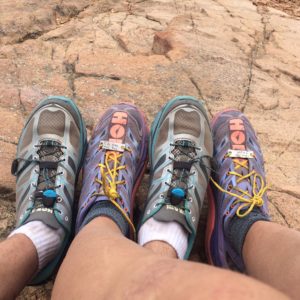 So, don’t listen to the naysayers. They’re wrong. Ultras don’t ruin every relationship they touch. Sometimes, they have a positive effect. Yes, you can have it all – love and high mileage, 100 mile finish lines and romance, sometimes both on the same weekend. 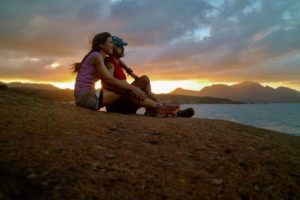 7 thoughts on “Love and Lots of Miles: Made For Each Other”