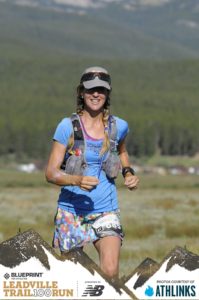 A picture of sanity, right before I fell apart at Leadville

Ultra runners are generally sane, reasonable, well-adjusted people. In spite of what our non-running friends believe, most of us lead functional, productive lives. We go to work, though our colleagues might consider us a little odd when we go for a run instead of joining them for happy hour. We maintain loving, long-term relationships, as long as our significant other understands our need to spend many hours alone on mountain trails every weekend. And when we do feel a bout of depression or anxiety come on, we at least know what to do about it. A good run will cure most of what ails us, most of the time.That said, we also suffer from a few mental and emotional disorders that don’t exist among the general population. Over the years, I’ve experienced painful episodes of these serious illnesses in their acute or chronic form: 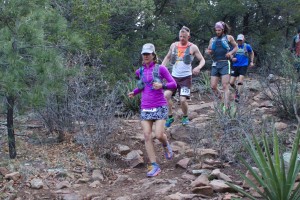 Twisted-ankle PTSD
The intense, gripping fear that any root and rock is trying to trip and injure you. I twisted my ankle on a steep, root, rocky downhill at mile 27 of the Bryce 100 a couple of years ago. There were 73 miles left to go, so I continued with the help of KT tape, a few Tylenols, and lots of endorphins released by liberal use of language too foul to repeat in a blog post. 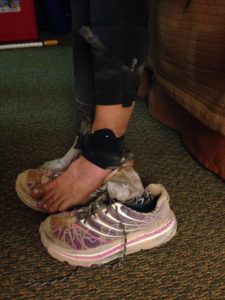 Running 70-plus miles on a twisted ankle is really not such a good idea.

By the time I crossed the finish line, my ankle looked like an overripe grapefruit. It eventually healed, but the mental aftereffects still haunt me. Every time I run down a technical stretch of trail, I break out in cold sweat and fight the irrational urge to put on the brakes. In races, everyone passes me on the rocky downhills. The only people who don’t are the ones with a more severe, or more recent, case of TAPTSD than mine. TAPTSD gets better over time, but, judging from my limited anecdotal evidence, it never totally goes away. 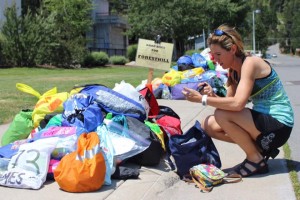 Drop Bag OCD
The compulsive urge to check and re-check and reshuffle and rearrange all the stuff in your drop bags a gazillion times, including in the middle of the night, right until it’s almost too late to drop them off. Often accompanied by nightmares of worst-case scenarios, like mid-race blizzards or killer bee attacks. DBOCD can lead to back injuries because it involves carrying a maximum number of bags overstuffed with things you’re unlikely to need. I’ve obsessed over my drop bags so much that I packed all my good socks/headlamps/warm layers, only to realize on race morning that I have nothing left to wear. The cure: buy a big, sturdy set of drop bags, label them clearly, and embrace your compulsive tendencies. You never know – you might need 23 spare batteries, a family size tube of athlete’s foot ointment, or an extra sports bra at mile 60.

A little niggle – or worse?

Pre-100 mile Munchhausen syndrome
The worrying conviction that any little pre-race niggle means you won’t get to run your goal race. A person with Munchhausen syndrome imagines herself suffering from various illnesses without actually being sick. Under normal circumstances, e. g. during flu season, ultra runners trend in the opposite direction: they imagine they’re healthy enough to run, even at times when, by most standards, they clearly aren’t. Three weeks before a tough 50 or 100, this changes. Every footache becomes a potential stress fracture, every sneeze and sniffle a symptom of incipient pneumonia. This is a self-limiting condition. After finally running the race, an ultra runner’s body suffers from too many real pains to make up imagined ones. 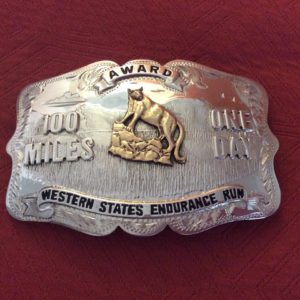 Buckle Envy
An intense, irresistible urge to stare at other people’s crotch areas for long enough to read the fine print etched into their belt jewelry. Common during pre-race expos, dinners and briefings, or at any other place where a) ultra runners gather in large numbers, and b) do so dressed in street clothes instead of running shorts. If the buckle in question is something the patient would like to wear on her own belt, heart palpitations and shortness of breath can develop, along with intense feelings of not being fast enough, or tough enough. Sadly, there is no cure until the patient has earned the coveted bling.

El Plato Grande, from last year. I do get to wear my buckles to work.

Weekend FOMO
This widespread, often chronic ailment is triggered by an overdose of certain types of visual stimuli in the patient’s social media feed, mostly on Mondays. Here are some common culprits:
a) selfies of smiling people on mountain trails and snow-capped summits
b) finish-line shots of runners, arms raised, faces showing equal amounts of pain and happiness
c) screenshots of race registration confirmations 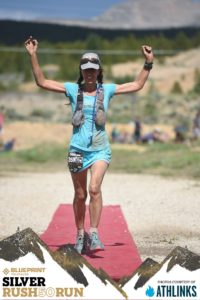 Symptoms consist of nagging anxiety and panic attacks. More severe cases (sometimes severe enough to miss work) cause impulse registrations on ultra signup or impromptu road trips to the mountains. There is no antidote. If you’re prone to this type of condition, it’s best to avoid all triggers. Unfriending all ultra runners is the only sure way to avoid a flare-up.

My DNF demon, from Leadville 2014. He called me “Quitter!” until I finished Leadville again in 2015

DNF Depression
A severe form of self-flagellation following an ultra run that ends anywhere but at the finish line. Characterized by repetitive, painful feelings of shame and regret, along the lines of “I should have dragged myself along the ground on my knuckles and knees for the last 25 miles, in spite of that torn achilles tendon!” Or simply “I am a quitter!” Well-meaning friends often try to soothe the symptoms of DNFD by pointing out that choosing to live another day was the sensible, rational thing to do, or that running for 80-plus miles before missing a cutoff is different from quitting. Their efforts are in vain. The only way to cure DNFD is to finish a race of the same distance and degree of difficulty. 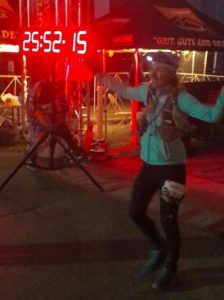 Leadville, 2017. I finished half-blind and barely upright, but already hope to run it again next year.

Serial Race Dementia
The strong and irrational urge to sign up for a race after you swore that you’d never run it again because it chewed you up and spit you back out as a shapeless clump of pain and self-pity the last time you ran it. SRD is common and generally harmless, but can be alarming for concerned family members unfamiliar with the condition who will think their loved one has serious memory issues. 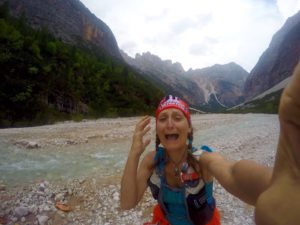 My friend Rachael, questioning her sanity at the Lavaredo ultra.

Which of these are you suffering from? Are there others I forgot to mention? Please let me know!

It’s a good time to be alive and running, for sanity maintenance and so many other reasons. 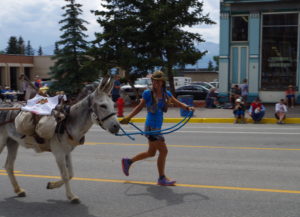 The next level of sanity maintenance: burro racing.

6 thoughts on “Mental Hazards of the Trail: Psychiatric Disorders of Ultra Runners”