Most people think I’m pretty tough. They’re partly right: I have finished ten 100-mile races, plus tons of other gnarly ultras. The oxygen-deprivation inducing altitude of Leadville does not scare me. Neither does the deadly combination of infernal heat and interminable hills called Western States. I have finished races bleeding, limping, and hallucinating, but I’ve finished all but two. I am not what most people would call a wimp, yet I turn into one when temperatures dip below, say, forty degrees. Winter weather is my kryptonite. It strips away my tough-cookie attitude and sends me, shivering, indoors to the nearest treadmill.

a Freezing morning at the start of the 2015 Grand Canyon Ultra. I am trying to be brave.

I know that’s pathetic. My Facebook feed shows enough frozen-beard pictures to shame me into trying to change my ways. There are, from the looks of it, tons of people who run in minus 20 degrees Celsius, and a few who run in minus twenty degrees Fahrenheit. But until this winter, I was not one of them.

My resolution for the 2016/2017 winter was to make over my wimpy ways. The timing was partly because of the plethora of frozen-beard pictures flooding my facebook feed, and partly because renovations at the local rec center meant I did not have ready access to a treadmill. So I bought some warm tights and fleecy gloves, and thought I was ready for the cold.

I admit that winters in Northern New Mexico are not, at least from what I’ve heard, as cold as winter in Minneapolis or Fairbanks. Still, New Mexican winters are no joke. We have mountains, and we do get snow. Especially after the sun sets, temperatures plummet into the teens, or even the single digits. The wind chill factor makes it feel even colder. The first cold front of the season hit in late November. It wasn’t minus 20 degrees, only about 25 plus (Fahrenheit, not Celsius). For me, that’s beyond humanly bearable, but I remembered my good intentions, so I bundled up, and headed out into the arctic. 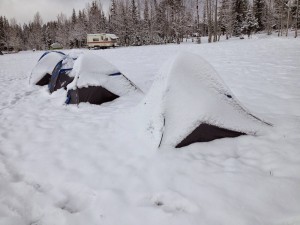 I survived a night in this setting! Grand Canyon Ultras, 2015

The cold hit me like a brick with about a thousand needles stuck in it. My face froze into a grimace of agony. My eyelashes became stuck in the open position, like in the torture scene of Kubrick’s A Clockwork Orange. The water in my bottle turned into a slushee. But I ran. I ran for a couple of hours, and I was proud beyond limits when I got home, where I turned the heater on full blast, then stood in front of it before stepping into a scalding shower until the hot water ran out.

For three weeks, I ran in any kind of weather. I ran after work, on dark, deserted country roads, carrying a head lamp wrapped around my water bottle. I ran in 35 mph winds that turned 13 easy miles into a serious resistance workout. I ran in a freezing drizzle that chilled me to the core and turned the roads into solid, slippery sheets of ice. I felt tough. I felt like I had conquered my wimpy self, or, like we say in German, my inner pig-dog, my Schweinehund. I picture this creature as a thin-skinned, chihuahua with a round, pink face and a snout like an electrical outlet, wearing a shapeless wooly sweater, long johns and thick socks who spends all day curled up in front of a blazing fire and snoring loudly. I thought I had kicked the pig-dog into submission, finally. I felt very smug as I trotted along icy roads and trudged through several inches of white stuff. I was sure I had reached the next level in the game of Becoming Badass.

In the midst of all that self-congratulation, I woke up one morning with a sore throat. I ignored it. I pretended everything was fine, but still swallowed a prophylactic handful of vitamin C and chased it with a nasty-tasting Echinacea drink. I ran that evening, though my lymph nodes had swollen to grotesque proportions and my legs felt like two stacks of bricks. The next day, I spent flat on my back, coughing and wheezing and piling up used Kleenex covered in green snot. My bed was the only place where life felt bearable. Chicken soup with green chile was the only thing that tasted good. This bug hit me on a Saturday. On Monday, I dragged myself to work, where I accomplished the bare minimum between coughing fits. I crawled back home in the afternoon, and did not move for the rest of the day, which, to make things worse, was beautiful: sunny, calm, with temperatures in the fifties. Tuesday l did the same thing. Running did not cross my mind. I tried every natural remedy from eucalyptus oil to power greens, then finally bought an economy-size bottle of NyQuil. After swigging a few shot glasses of this stuff, things improved, little by little. But even though I am finally running again, I have learned my lesson.

Good-bye, arctic conditions. More power to you, my intrepid friends who don’t mind frostbite. I admire your frozen beards more than ever, but from afar, meaning: through a double-pane window, from aboard a treadmill inside a heated gym, with my gloating, grinning, sweater-wearing inner pig-dog perched on my shoulder.